Season's Greetings from Friends of Chitambo

2016 has been another amazing year, tinged only by sadness at the news of the death of His Majesty Chief Muchinka, Chief of the Lala people.  Our thoughts are with the Chitambo community as they mourn the loss of their esteemed and much loved Chief this Christmas.

Our thoughts are also here in Scotland, with the sad news that our Honorary President, Janet Knox, has fallen and sustained a hip fracture.  Janet has been battling metastatic breast cancer and other health problems.  However, thanks to the good fortunes of our Scottish NHS, she has now been to the operating theatre and had the fracture repaired.  Apparently she was awake and eating when her family visited.  She is much comforted by well-wishes from Zambian friends and has a copy of the photo below at her bedside.

We wish Janet a speedy recovery from the fracture.  We are enriched by the example of our Chitambo elders, Chief Muchinka and Ba Janet, who served as a nursing sister at Chitambo in the 1960s.  Her memories of that time remain strong and bright.

Here are a few images of our year. 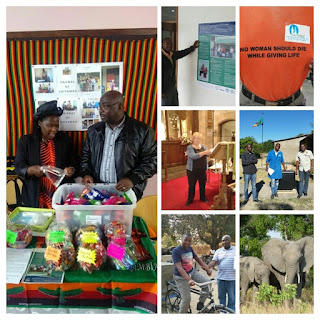 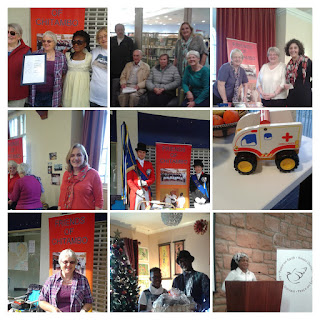 Thank you to all our supporters and we wish you a very Happy Christmas and a prosperous 2017 when the time comes.
Posted by Jo Vallis at 00:11:00 No comments: Links to this post

Our Penicuik Christmas Street Fair was a great success again, with particular thanks to Gillian who put in a lot of work on producing goods for sale and enlisting a kind friend to help with the stall.  Thanks, too, to Catriona who came out from Edinburgh to help.


We were also very much blessed by the presence of Scottish/Zambian community member, Davis and his young son Tengy.  Ba Davis is a highly talented gentleman, with experience of working in Scotland and Zambia.  He has joined Friends of Chitambo and will be a great asset to the cause.

Young Tengy, however, could be even more of an asset.  As an aspiring young businessman in his own right, he bought a raffle ticket and won our Christmas hamper!  We need him on board.


However, Tengy is not our youngest member.  That's David, aged nearly 2.  His Mum, Olu (originally from Nigeria) is our Acting Treasurer.  At our recent Friends of Chitambo  AGM and 3rd birthday party, we gave David a toy ambulance....the Chitambo ambulance in miniature....and we are thinking of enlisting him on Levi's proposed First Aid for ambulance drivers course.  He may be young but he's very bright and a fast young learner.  He is bound to excel!

The link between Ron Swanson and Friends of Chitambo runs even deeper.  Our Honorary President, Mrs. Janet Knox, was a close friend of the family during her days as Nursing Sister at Chitambo.  See Janet pictured below, in her nurse's uniform, together with Chitambo missionaries and their children:

Janet was Aunty Janet to Ron and his siblings!

Very sadly, Janet is gravely ill with metastatic breast cancer, although she remains typically brave and in good humour.

Local Friends, Jo, Margaret and Gillian, recently enjoyed an indoor picnic with her.  After a sumptuous feast of Giovanni Bistro sandwiches (supplied by Margaret) and many other 'goodies', we repaired to Janet's bedroom so that she could put her feet up whilst we read extracts from a book about the transition to Zambian independence and reminisced about her Chitambo days.

It was an intimate and memorable occasion with much laughter and fun...just as our President wants it.

She was also very appreciative of email communications from Levi Chifwaila, Senior Nurse Tutor at Chitambo School of nursing.  Levi met Janet during his visit to Scotland (June 2015), on behalf of our Scottish Government-funded Small Grant project on 'Strengthening emergency care communications in Chitambo District'.


Janet is much comforted by Levi's emails.

Our love is with her.

There's a lot of catching up to do!

Friends of Chitambo Trustee, Richard Vallis, was selected to receive the Great Scot Award on behalf of Lung Ha Theatre Company, which he founded: http://lungha.com/

Nice that the event also honoured leading individuals from Scotland's ethnic minority groups, including  murdered Glasgow shopkeeper Asad Sha, and Kalhid Ghelan who raised over £300,000 for judo stat Stephanie Inglis's treatment, following a motor bike accident in Vietnam,  Both these awardees received standing ovations and Kalhid Ghelan was the overall winner of the Great Scot Award.

Richard is a truly Great Scot: in his own right and recently also won Archery Scotland's Coach of the year Award for his contributions to Disability Archery: http://scottisharchery.org.uk/news/scottish-archery-awards-agm

The Great Scot event also doubled as a golden opportunity to meet up with Ron Swanson, another Great Scot with a Chitambo connection.

"After 56 years, it was wonderful to meet up with Dr Jo and Richard Vallis.
Jo’s family - the Currie’s and the Swanson family were brought up together, in the early 1960’s, in the Chitambo Hospital Mission Station, in what was Northern Rhodesia, now Zambia.
Chitambo has major historical links with Scotland, as it is where the famous missionary/explorer David Livingstone died – the hospital is known as Livingstone’s hospital.
Jo Vallis is the founder and chair of the charity “Friends of Chitambo” supporting the wonderful work of the hospital, serving a community of 100,000 people – just slightly smaller than Ayrshire.
As a family, we are planning a very special nostalgic visit to Chitambo in 2017 to experience at first hand the lasting legacy of the late Ron & Mary Swanson who in 1960 left the comfort of Glasgow, with their three very young children, to serve as Church of Scotland missionaries; with our father being responsible for the building and construction of many of the hospital buildings, including a maternity wing, nurses hostel, the Doctor’s and two Nursing Sisters houses – the good news, nearly 60 years later, the buildings are still standing and being fully utilised to support the needs of the community.
The old photos include a very young Ron & Mary Swanson, with their three bare footed children – Elizabeth (7), Ronald (3) & baby Andrew (6 months).
We have so much to be thankful for ……..."

Ron's Dad, also Ron Swanson, was a missionary builder at Chitambo and built the 'old' student nurse hostel, which is still in use today:


Here are some photo of the your Ron at Chitambo: 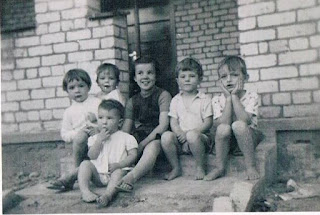 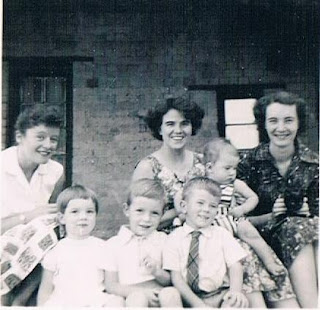 Their Facebook page is an inspiration to us on getting our message 'out there' and we are working on developing our own page.