It's official, Friends of Chitambo has won a second round of Scottish Government Small Grant funding for our project on 'Strengthening emergency care communications in Chitambo District, central Zambia': Click here to read more
It's going to be another very busy but productive year for us!

An information day was held on Thursday 23rd March, at the City of Edinburgh Methodist Church
Click here

Dr. Alistair Allan,  Minister for International Development, opened the meeting by outlining Scotland's  new International Development Strategy.  This was followed by presentations by members of the ID team as well as the High Commissioners of Rwanda and Zambia before Lloyds TSB Foundation explained the application criteria for the new funding round.

There were workshops and networking opportunities.  See some images from the day: 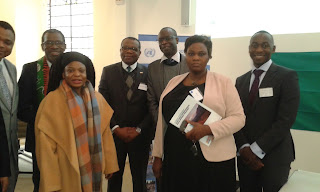 Thank you to Penicuik Rotary Club

As well as the very generous donations at Janet's funeral, we were also blessed recently with a giant cheque from Penicuik Rotary Club.

We were invited to an evening presentation and photoshoot at the Navaar Hotel, Penicuik.  .Jo, Richard and Gillian attended and here are the photos to prove it. 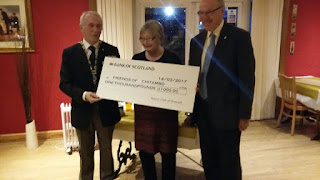 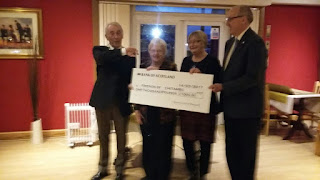 WhatsApp thank you messages were received from Zambia.  We expect these funds to go towards purchase of a further Very High Frequency (VHF) radio for one of Chitambo District's  remotest, most isolated Rural Health Clinics.
Posted by Jo Vallis at 21:26:00 No comments: Links to this post

A Fond Farewell to Janet

Despite the unseasonable snowfall, there was a massive turnout....a measure of how much Janet was loved and will be missed.

Janet's grand nephew, Sam, enabled a live video link to the funeral so that family and friends as far afield as Australia, Norway, New Zealand and Zambia, as well as many local friends,  were able to attend virtually and hear the beautiful Eulogy prepared by Janet's family and read out by the Minister who conducted the service.

Sam has since created a YouTube video so that you  can still 'be there': Click here for the video

Janet's last wish was for the retiring collection to go to Friends of Chitambo, a typically thoughtful and generous gesture.   Her family suggested that we put a leaflet about the charity and donations process on on the church pews before the service: Click here for the leaflet
However, the snowfall put paid to that as the Friends of Chitambo party only just arrived in time.

Even so, it seemed that the donations box was already stuffed full!  And, at the post funeral tea, friends and family were queuing up to give donations and complete gift aid envelopes.  We were overwhelmed by the generosity on the day and later when Janet's sister, Lindsay, paid another  very generous online donation into our account.  This was partly from herself and also from the Australian side of the family.  We are very grateful indeed and can't thank them all enough,  All told, Janet's farewell gift to Friends of Chitambo has been truly magnificent  and we plan to ring fence it for further Student Nurse Training Scholarships in her name: The Janet Knox Nurse Training  Scholarships.

Natotela saana mukwai (thank you) Ba Janet, we are still feeling your love.